This book presents a new edition and translation of three seventeenth-century Irish wedding poems and considers the relationship of each
poem to its occasion. Primary focus is on two compositions by
Dáibhí Ó Bruadair, the most illustrious poet of his period, who
celebrates wedding festivities at the home of his patron in Cahirmoyle,
Co. Limerick. Ó Bruadair comes to the feast to ‘entwine and marry’
the couple, and he accomplishes the task in a recitation of conventional
praise, comic verses and prose interludes. A third wedding poem by a
lesser known author with connections to prominent Ulster families is
included as an Appendix.

In a wide-ranging introductory discussion the author explores various
contexts for interpreting Ó Bruadair’s wedding poems. Drawing
on primary historical sources, eye-witness accounts of travellers in
Ireland, and the work of other scholars, she brings together the scant
details of the poet’s life and considers historical events which affected
him and his patrons. The poems themselves are a rich source for the
poet’s role at the wedding feast. The performances are set within a
mix of prose and verse known as crosántacht, and an analysis of
Ó Bruadair’s distinctive rendition of this style concludes the
introduction. Extensive textual commentary on language and
topographical allusions is provided, and the editions include a detailed
metrical analysis. 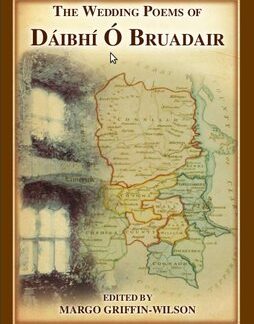 You're viewing: The wedding poems of Dáibhí Ó Bruadair €40.00
Add to basket