The Book of the O’Conor Don

The Book of the O’Conor Don is one of the most important Irish manuscripts surviving today. It contains a large collection of bardic poems dating from the 13th to the 17th century, and is the most important single source for this type of Irish literature.

The manuscript was written in Ostend in 1631, by Aodh Ó Dochartaigh, a soldier in the Irish regiment, for Captain Somhairle Mac Domhnaill. Patriot, pirate and man of letters, Captain Somhairle is one of the most colourful patrons in Irish literary history.

This volume contains the proceedings of a conference that was organized to celebrate the digitization of the Book of the O’Conor Don by Irish Script on Screen, the manuscript digitization project of the School of Celtic Studies, Dublin Institute for Advanced Studies. The papers presented here address different aspects of the manuscript: scribe, script, contents, themes, historical context and scholarly legacy. 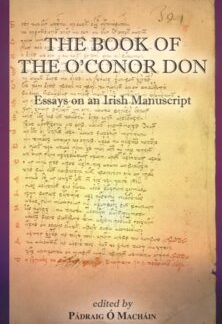 Due to the Covid 19 pandemic, Ireland will be subject to a new set of lockdown restrictions until 1 December 2020. As a result, access to DIAS buildings and book stocks will be greatly restricted. and this will impinge on our ability to deal with book orders during this period. This unfortunately will lead to delay in processing orders. We would ask for your understanding and forbearance at this time and we will endeavour to resume normal service as soon as is possible. For any queries please contact Reception reception at admin.dias.ie / 01 6140100 Eibhlín Nic Dhonncha eibhlin at celt.dias.ie / 01 6140183 Dismiss