Scriptural Instruction in the Vernacular: The Irish Society and its Teachers 1818–1827

This book researches the activities of the early nineteenth-century evangelical organisation known as The Irish Society for the Promotion of the Education of the Native Irish through the Medium of their own Language (1818–27). The Irish Society was founded with the object of enabling illiterate Irish speakers to read the Scriptures in their own tongue and of proving them with the means to obtain a a knowledge of English in the process. The author has assembled an annotated list of some 750 Bible teachers recruited by the Society to teach the Scriptures to their neighbours, young and old, in their native language, thereby furthering the Society’s proselytising policies. In making available as much information as possible about individuals, particularly those teachers who were (or may have been) Irish scribes, poets or scholars, much valuable light is thrown on the cultivation of the Irish language in the decades before the Famine.

The persons whose activities are chronicled in this book mirror the events and social circumstances of this crucial era in pre-Emancipation and pre-Famine Ireland. Predating the advent of the National Board of Education, under whom many of the teachers listed here would eventually find steady employment, the events dealt with also cast light on the figure of the hedge-schoolmaster, and on important questions such as literacy and learning among the population. Above all else, the work shows how the Irish language was cultivated among some of the last of the traditional scribes and poets, and how for a while they received, and exploited, patronage from a most unexpected source.

This is a revised and augmented version of work originally published in seven parts in Éigse A Journal of Irish Studies between 1983 and 1993. The author acknowledges his indebtedness to the National University of Ireland as publishers and to the Editor of Éigse. 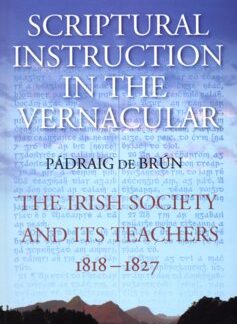 You're viewing: Scriptural Instruction in the Vernacular: The Irish Society and its Teachers 1818–1827 €40.00
Add to basket