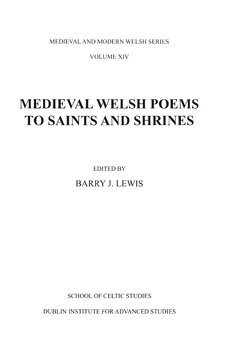 This volume presents a selection of Middle Welsh verse illustrating the cult
of saints, shrines, relics, holy wells and pilgrimages in late medieval Wales.
Composed between c.1440 and c.1540, these twenty-five poems give voice
to the devotion of the poets and the patrons – clerics, laymen and women
– whom they served. There are poems in honour of Christ and the Virgin
Mary, St Margaret and St Mary Magdalene, but most are addressed to the
many local saints of medieval Wales, ranging from Mechyll and Elian of
Anglesey in the far north to Tyfodwg of Glamorgan in the south. Finally,
the journeys of Welsh pilgrims abroad are represented by a description of
the sights of Rome and a prayer for a pilgrim facing the hardships of the
long voyage to Santiago de Compostella.

The texts are presented in the original Welsh, with an English translation and
extensive notes on the authors, the shrines and the content of the poems,
and a full Welsh-English vocabulary. A substantial introduction situates
the poems in the context of the Christian cult of saints and shrines, and
assesses their place in the poetic culture of medieval Wales. It also provides
a complete guide to the intricate metrical artistry of the poems. The volume
is intended both for students of Middle Welsh literature and for anyone
interested in late medieval devotion.